In this tutorial about Signal integrity SI the basic concepts of high-speed data transmission are explained in individual short films. Given that digital signal lines in the PCB layout are longer than the critical length, then they are no more normal lengths but transmission lines. That means high-speed signals have to be considered in specific design rules. Such design rules you will find on your component data sheet or you determine them yourself with an SI simulation of the signal integrity. 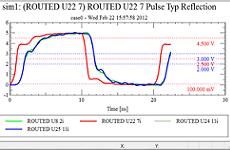 We compare between two sort of lines concerning lines on a PCB. The microstrip line is on outer sides and has only one reference plane, while the stripline runs on inner layers between two reference planes. The propagation speed of the signal at a stripline calculates simply because only one dielectric constant (εr) must be taken into account and it usually results a value around 15 cm/ns.  In case of a microstripline there is air or protective lacquer on one side and the calculation is more complex. The transmission speed to microstrip lines is faster as on inner layers.

Whenever a transmitted signal strikes a discontinuity in the impedance, there will be reflections. Causes of discontinuities are: Impedance change (layer structure), vias or impedance loads. The amplitude and the polarity of the reflected wave is the product from an incident wave and the reflection coefficiency. The signal voltage is the sum of the incident wave and the (positive or negative) reflected wave. Even reflected signals are reflected back to the driver after they have completely run back from the receiver to the driver.

Earlier connections on printed circuit boards could be assumed to be ideal, since the applied signal arrived almost simultaneously at the receiver. In today's high frequencies and fast rise times it comes to different signals at the transmitter and receiver. The connections on the PCB must be accepted as an equivalent circuit of cascaded RLGC elements. Thus, the AC behavior changes especially for high frequencies.

The latest Quarterly Incremental Release brings numerous innovations. All customers under maintenance can download the update for free.... More...
© 2020 FlowCAD